In this regular feature, which also appears within our Newsletter, we will be introducing you to each member of our Deepness Board Members. 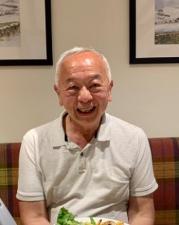 Hi, I was born in Hong Kong on the 8th of December in 1949, it was a Thursday.  I grew up with my two sisters who are still living in Hong Kong with their families.  After primary school I attended St Frances Xavier school, which backed onto a food street and at break time we would all sneak out to get some cheap dim sum snacks.  School days in Hong Kong where six days a week although Wednesdays and Saturdays where half days and Sundays were always saved for family gatherings and festivities.

Have you always lived in Hong Kong?

I arrived in the U.K in 1968, where I had all my higher education in Scotland and qualified as a biology teacher.  I then went on to teach in four schools for thirty six years.  Over the coming years I married, but sadly my late wife passed away from breast cancer after we where married for twenty years.  After a period of time, I then met and married my wife of eighteen years.  We have four children between us and have been blessed with two precious, little grand daughters.

What form of dementia did you get diagnosed with?

I was diagnosed with Alzheimer's dementia and my life and my families lives kind off fell apart.  It actually coincided with me reading a book by Doddie Weir, who was diagnosed with MND.  Basically what he said was...if you cant beat them, then you might as well join them and do something with your new life.  I thought that was the right thing for me to do, hence I started looking for groups to join.

How did you get involved in Deepness Dementia?

I found the group called Deepness ltd and became a member as they are doing wonderful things in helping people with dementia.  In fact I was so impressed that I became a board member, which lead me to make new contacts with wonderful people such as Ron, Karen, Willy, Gerry, Agnes, Julie...the list is endless.  Deepness Ltd has given me a new lease of life, allowing me to feel that I am not only living with dementia - but living a new and better life - these are the feelings of my family too. 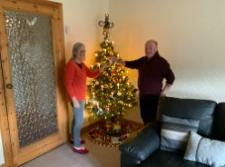 I live in the family home and Alan lives in a flat near the facilities that he needs.  We have been married for over 50 years and have one daughter, Donna.  She is amazing woman has supported us all of this time with our diagnosis and in the last three years has become a carer for her husband who has Motor Neurone Disease and is now totally dependant on her so she supports us by phone.  A distant carer.  This isn’t how we thought our life would turn out.  Dementia sucks!  Well, if you make it suck.  But as a family, we decided to make the best of what we had.

Over the years, I became a campaigner for dementia.  Dementia is more than memory (https://dementiasupportuk.org/resources/ebooks/talking-sense) I was awarded an MBE and a Churchill Fellowship for my dementia work.  I’m not bragging, the reason I say this is, as a campaigner, I’ve met others with dementia and have learnt a lot and I owe all my successes to a lot of people who have sadly died and passed on.  And I want to turn this learning into a tool to live with the best life possible and have fun.  I joined the DEEP network (https://www.dementiavoices.org.uk).

As you can see, life doesn’t end after diagnosis, but knowledge is power and we need to find out how to carry on the best way we can.  It is personal to your own life.  Last year, over Covid, through the DEEP network, people living with dementia started to send little cheerful gifts to each other to lift each other’s spirits.  These gifts were handmade.  As you can see there’s many things you can do to help yourself live a life full of hope.  HOPE meaning:

H – help one another
O – optimism
P – plan your future so you can live today (https://www.myfuturecare.org)
E – Enjoy life as it is.

That’s what I have been doing.  Christmas I love this time, but to enjoy it, I have to plan it carefully and pace myself.

Its time to rethink dementia... 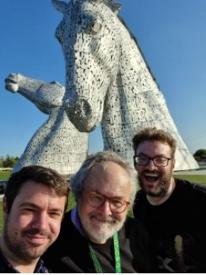 Hi, I want to suggest that its time for us to rethink dementia.  To consider what people with neurodegenerative illness can do, to concentrate more on the positives and less on the negative's.

Yesterday, in the company of others with dementia I spent the morning learning to count in Gaelic, and the afternoon writing poetry.  Its fair to say that a lot of tea was drunk and scones consumed...and the sound of laughter echoed around the community centre.  But this picture isn't,  I think, what people generally consider when the think dementia:

they're more likely to picture fold in high back vinyl chairs, eking out their days.

They might be more of people in later stages of the disease, and not realise that many people with dementia can lead a good and fulfilling life, and take part in meaningful, therapeutic and fun activities.

In our group were people at different stages of the disease.  A few are now finding communication hard.  One struggles to concentrate now , another has become largely mute.  But others are busy picking out scrabble times as prompts for poems, or listening back to the song we wrote together a few days ago.  There is a lot of mutual respect and understanding - we know that our diseases will progress and that the lively person we meet one week may have changed in a few months or years time.

No one gets criticised for what they cant do !!!

I love them all.

What form of dementia did you get diagnosed with?

I was diagnosed with early stage Alzheimer's Disease in April 2021, with atrophy in my partial lobes. This means that my eyesight rather than my memory is effected.  Diagnosis during lockdown was, frankly, terrifying.  But when I started to meet others with similar conditions life became easier.  Not less, because between us much goes unsaid.  Others have been through the trauma of diagnosis, of renegotiating work and family roles, of trying to come to terms with being a 'person living with dementia'; together, we understand.

Life isn't fair.  Cancer patients have Maggie's Centres and free advice and counselling - by comparison the support offered to people with degenerating brains is poor.  We are too easily cast aside and forgotten.  But, now, I want to argue, its time for things to change.  We know that purposeful activity can work wonders in terms of slowing the progression of the illness.  We know people with dementia are capable of great things, if offered the chance and opportunity.  Between us we write plays, paint pictures, run training courses and enjoy sport.

So please help us persuade the world to rethink dementia 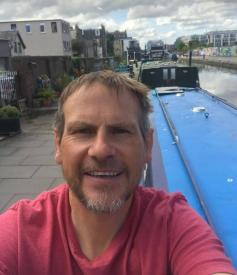 Hi I am Jim, I live in Edinburgh on a canal boat with Honey the Dog, working as a close-up magician.  I've always wanted to live on a canal boat, so during lockdown, I decided to follow my dream and moved here in November 2020 - I absolutely love it!

But you don't sound like you are from Scotland?
I grew up in the south of England, on the outskirts of London.  I moved up to Scotland to study at Dundee University and apart from a few years in the north-east of England, have been in Scotland for 30 years.  Wow, I didn't realise it was so long - Scotland is certainly my home!

What's your background - have you always been a magician?
I certainly have performed magic since I was a child, but didn't become full-term until 2017.  My background before that was in the mental health field, training and working as a mental health nurse, working in academia and education, before finally taking the plunge in 2007 to become self employed in mental health training, research, writing and practice.  From my own personal experiences of mental health, I had a passion to bring some change in the mental health system, promoting that mental health recovery is possible.

How did you get involved in Deepness Dementia?
I am good friends with Ron and Karen who formed Deepness Dementia and have been working with them for 14 years.  I admire their vision, drive and passion to create change, unlike me they don't hold back, instead just go for it.  When Ron was diagnosed with cognitive impairments and possible dementia, I starting telling friends and their response was "Oh I am so sorry to hear that".  It made me realise how much there is mis-understanding and stigma attached to people living with dementia.  Ron would say his life is better than it has ever been!  So when he started talking about Deepness Dementia and the vision, I just had to get involved! 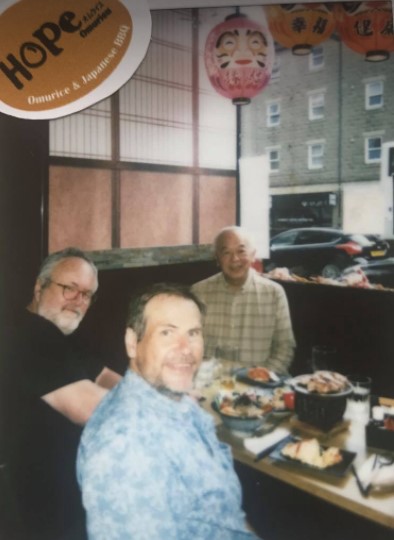 This is the first time I have been a Board Director, so I am really liking it.  I am one of the only few board members without living with dementia or cognitive impairment, so that's inspiring.  I love being part of helping form a new organisation.  We meet every month on Zoom, which is great to bring everyone together.  I am looking forward to the conference in September to meet everyone in person.

I met up with Willy and Michael last week, who are also on the Board and also live in the Edinburgh area.  Was lovely to actually connect with them in real life.  Check out the photo, we had a fantastic lunch at a Japanese Restaurant - I can highly recommend.